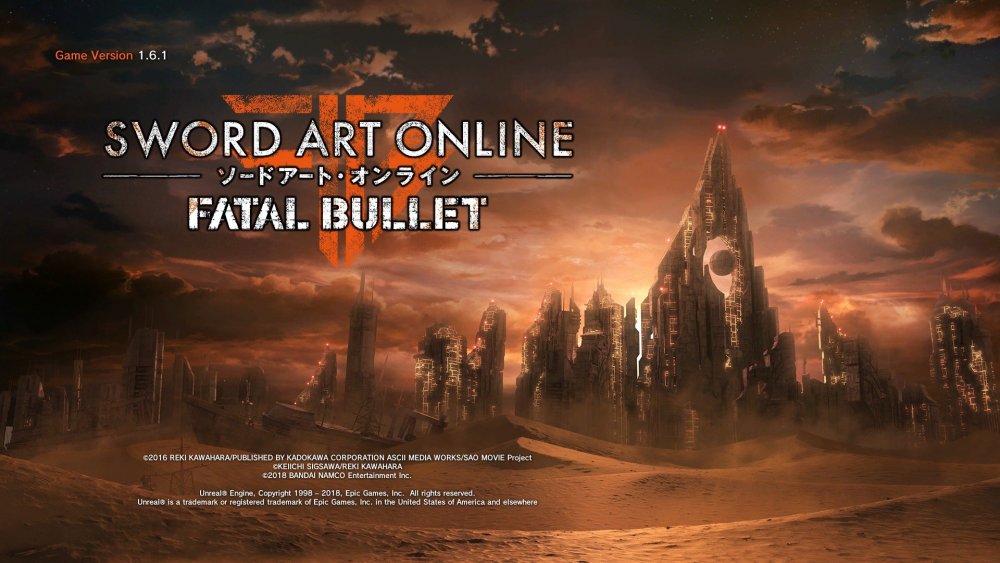 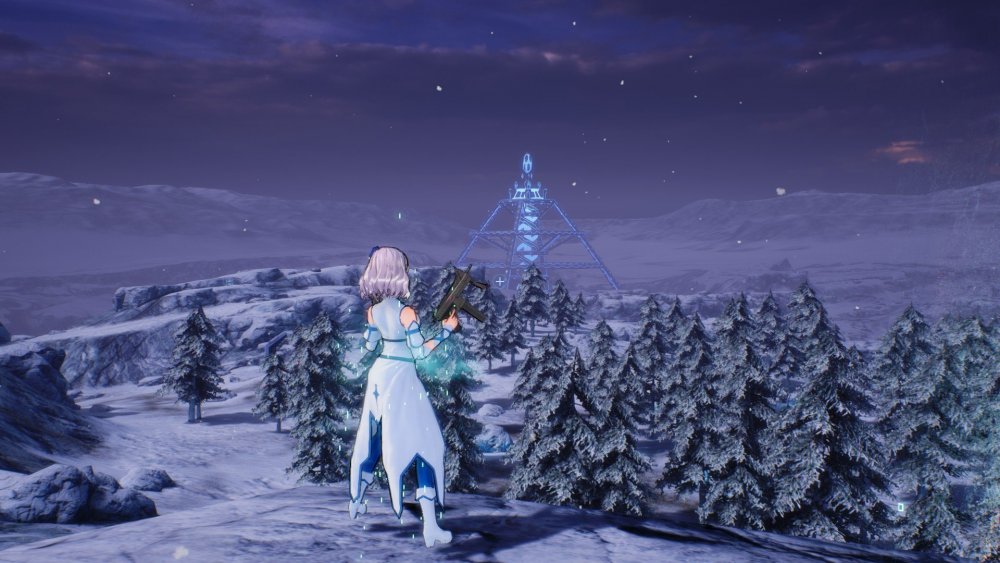 I'll just save you some time here. It sucks.

I mean, I was going into this game thinking that the game was going to be an absolute shitshow because the entirety of the SAO franchise has about as much consistency as a paper airplane that wasn't folded right. As I said before, Sword Art Online takes place in an alternate universe that is nothing like the original two. As SA:O takes place in its own universe, and SAO: Hollow Realization takes place in the universe of ALO, Fatal Bullet takes place in a universe called Gun Gale Online, or GGO for short. Which, by itself, was actually the best arc for SAO. But it's still bad.

Okay, so I'll just save you some time here and sum up the story in a few sentences, as the game doesn't really have a strong story department: It's bad. There are consistency issues all throughout the game, and the inclusion of different story modes throws curve balls at you like Nolan Ryan threw strikes (that's a baseball reference, folks). And some of them don't even make sense. For example, about 3/4s of the way through the game, a new mode is introduced called Kirito Mode.

Because of course, we need to include our shining hero of the franchise just to make sure he gets his screen time.

The entire reason you have to do this Kirito Mode is because of a player within GGO's universe who is killing players. Even though PK'ing in the game (which was said multiple times) is completely okay. He goes by the name of Death Gun, the most edgiest name that would put Shadow the Hedgehog in his place. This moment, this plateau of action, unfortunately, only happens about once you're 2/3s of the way through the game. The rest of the time, you'll be going from Point A to Point B in between, learning all about your characters backstory and what brought them to GGO in the first place.

There's Kureha, Zeliska, Itsuki, and Bazalt Joe who are new players to GGO, then you have all the favorite characters from SAO: Kirito, Asuna, Silica, Sinon, Leafa, Agil, Klein, and Lisbeth. I'm sure I am missing a few but I don't care because the game doesn't give me a reason to care about these characters other than the fact that they were stuck into the game just to ensure they got their appropriate screen time.

Okay, so going back onto the plot: Death Gun actually ends up being two different people. Which, looking back on it now, was a cool concept, because ever since NerveGears were banned due to the events that happened in SAO, new technology was implemented to stop that. However, Death Gun was working in conjunction with another person in the real world to keep his visage, his image, of being a psychotic murderer, while the person in the real world did the dirty deed. This was a cool idea to me, but.......there was no resolution to anything.

You go into Kirito Mode, because you have to in order to find out who Death Gun really is, go into a championship, beat his lanky ass, and figure out that there was another person behind the scenes pulling the strings.

...And that's it. There's no proper resolution for the arc, unless you go back to playing your created character. It feels as though the entirety of the plot was mashed together in a blender when they were trying to make a margarita, but instead they ended up making a smoothie with ice chunks still in it.

Also, you can date your sister in the game in Kirito mode. No, I wish I was making this shit up, but no, it's an actual thing. Which goes to prove that Reki Kawahara is nothing but a pervert. But we already knew that. 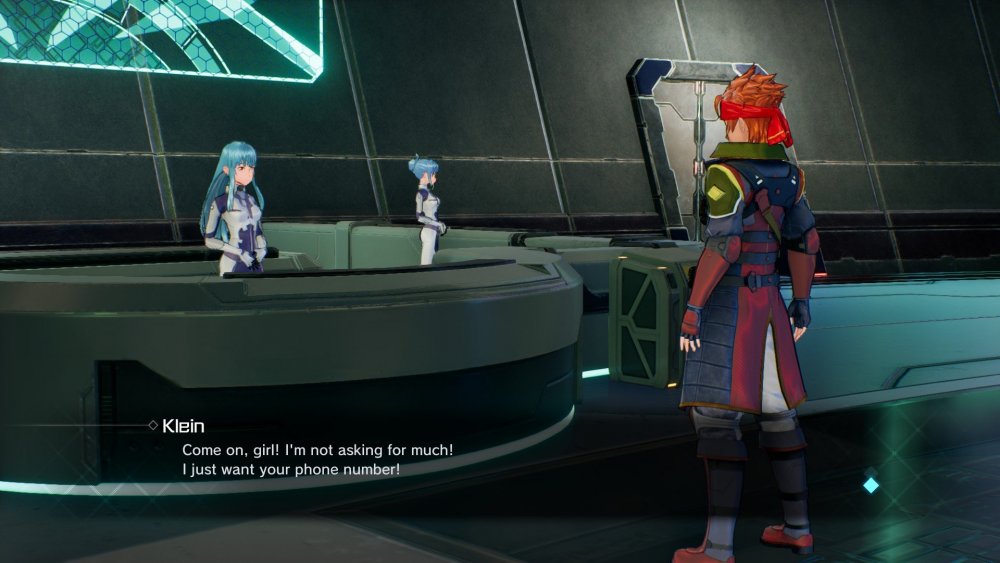 Alright, in the vein that the story sucks, the gameplay is actually the most redeeming and probably the most addicting part of the game. There are so many good gameplay features. But in the same sense, there are also some bad gameplay choices that don't make sense unless you actually look up a guide of what you are supposed to be doing. So let's get the negative out of the way first.

After the Death Gun arc, a new mechanic unlocks called "Affinity" between all of your party members. You have to raise this Affinity to near max with all the original GGO characters (Kureha, Itsuki, Zeliska, your Arfa-Sys Unit, and Bazalt Joe). However, the game does not tell you about this new gameplay mechanic change in any way or fashion. And if you don't do it, you won't get the true ending. That kind of pissed me off.

HOWEVER, the gameplay features of this quickly outclass the shit story the game presents. As I am a gameplay trumps story kind of person, I quickly fell in love with how much you can actually DO in this game: From creating your character, from changing your outfits, to minmaxing your weapons to making sure they are the best goddamn shredders in existence.

So let's start. There is an extensive weapons system in this game that allows you to customize and enhance your weapons, up to a certain point, making it essentially a minmaxer's paradise. For example, Handguns in this game have some of the best Critical stats but have shit stopping power. So to compensate, you would stack some Weapon/Physical Attack on them to make them slightly stronger. Up to a point. There's a hard cap on how much you can upgrade your weapon and its stats, but when you reach that point, you are already powerful enough that you can destroy bosses in mere seconds with your weapon. And there are many many weapons you can acquire in this game. Handguns to Full Auto ARs, Burst fire ARs, grenade launchers, and rocket launchers. You can even hold a fucking Gatling Gun. A GATLING GUN. 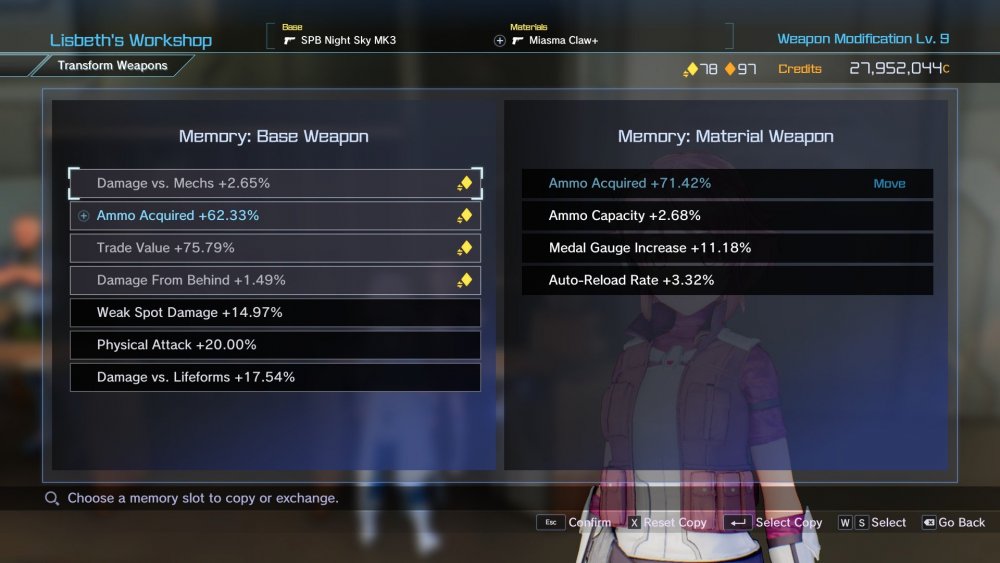 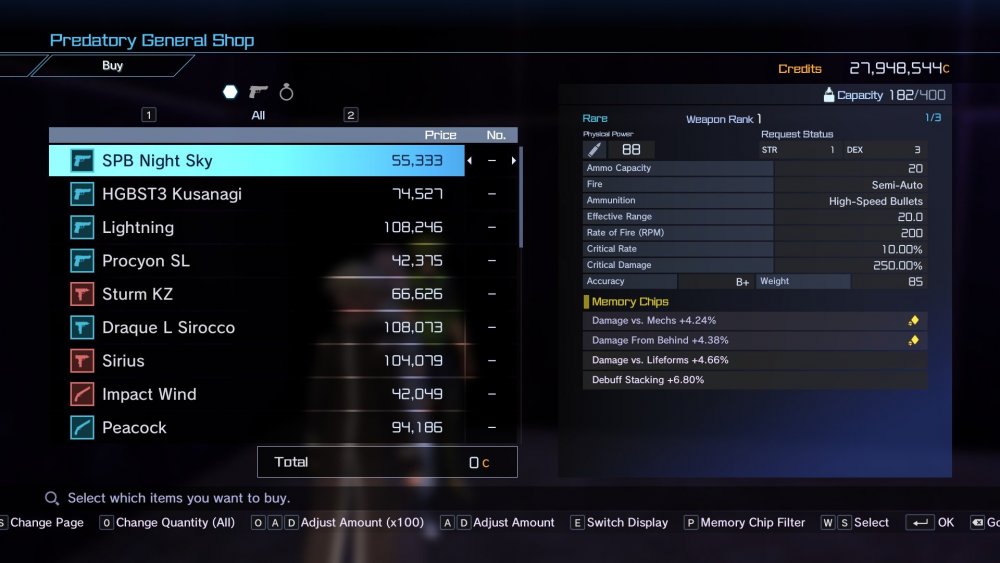 The world of SAO: Fatal Bullet is massive, with 4 different areas (5 if you count the DLC) where you can go to...kill monsters basically. My favorite Area was an Area called The Old South, because it literally is a callback to NieR Automata's City Ruins. There are Side Quests in this game as well, which augment and complement the world of SAO: Fatal Bullet as well. But these are basically kill X amount of Y quests, looking for Treasure Chests in the overworld or in dungeons, or PK'ing other players. Basically, there's lots to do actually in SAO: Fatal Bullet, which is why I enjoyed the game so much. There are so many different build combinations you can do for your characters that one playthrough isn't enough to justify the game. For example, you can be a DPS Sniper, a tank who uses a Shotgun with CC abilities, a debuffer, a Support with massive Strength, basically anything you can put your mind to, you can do it. 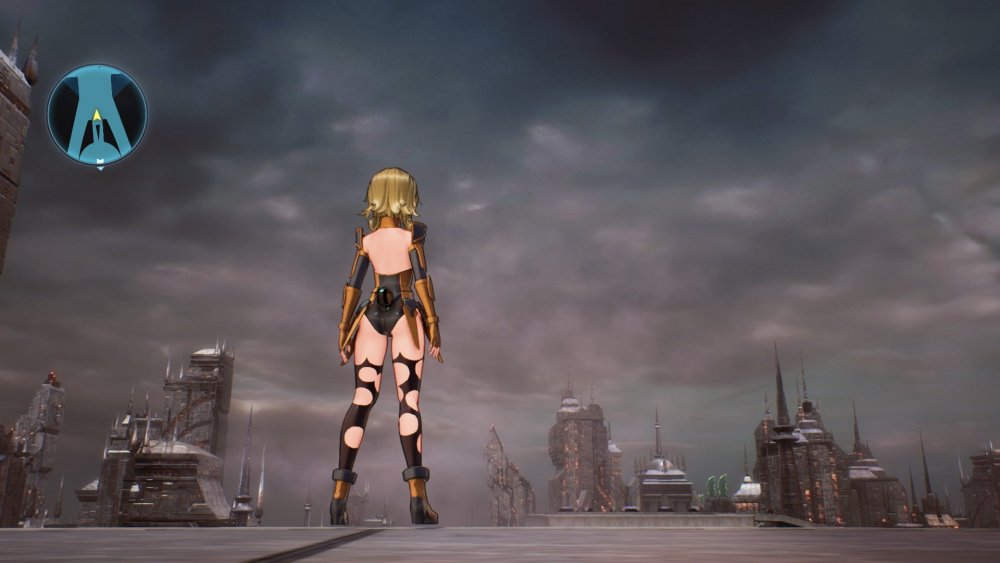 So for all the faults that the game has, it has an equally amount of good gameplay parts. However, I will say without the DLC, you can't get into all the dungeons in the game, which I don't personally agree with. If you're gonna lock content behind DLC, it should be free, or not be in the map in the first place. Because I'm trying to get into the Demon Cave without the DLC and it wouldn't let me, even though there was a Quest there which required me to go to the Demon Cave so I couldn't complete it. 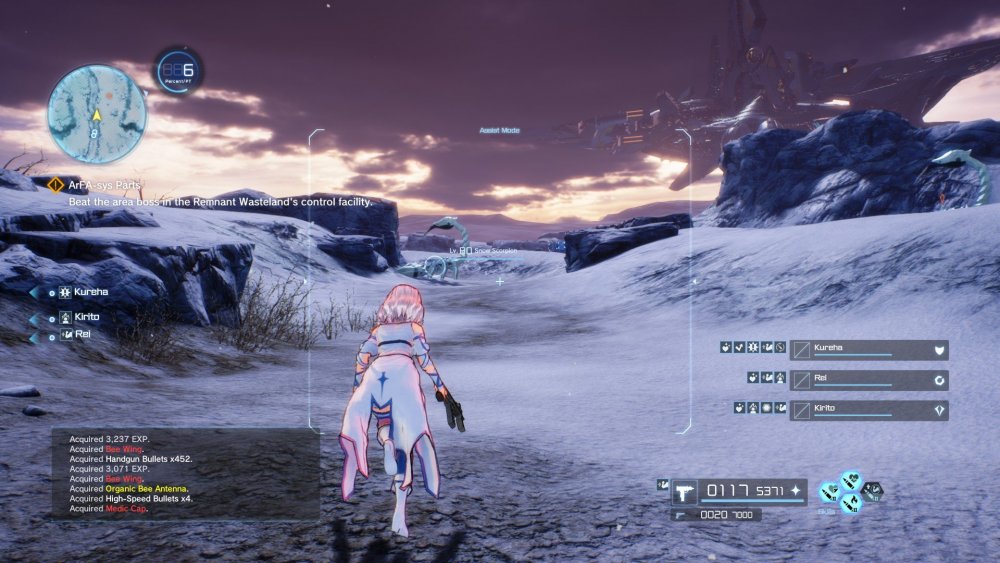 So all in all, the gameplay isn't bad. 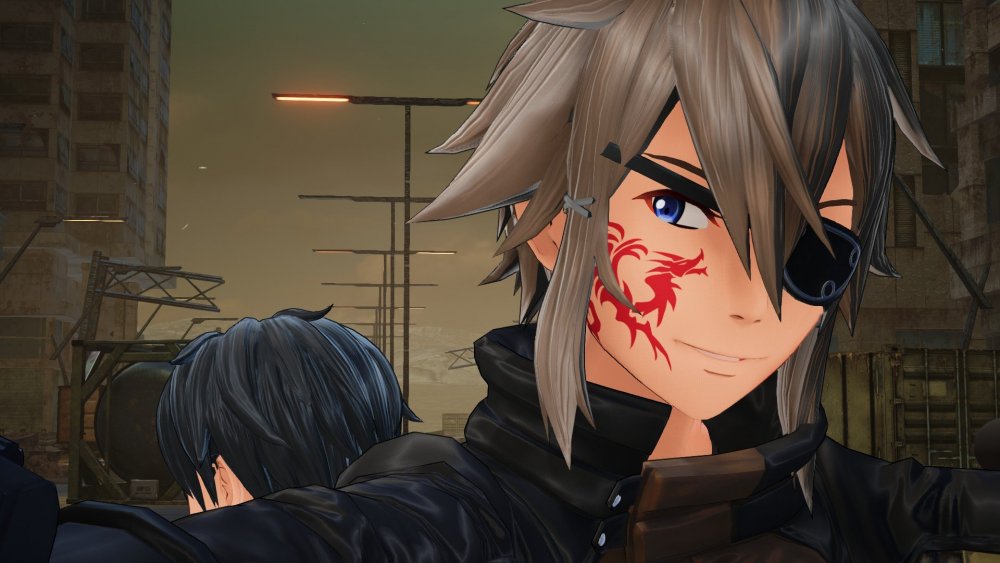 It's.....about what'd you'd expect from a port. It works. That's just about it. I could run it at 60 FPS with no problems. Although, in some certain situations my frame rate would lock itself to 30 for no reason. I don't know if it's a Steam or a port issue but that was a minor inconvenience to me at most.

What WAS actually an inconvenience for me is that sometimes, button inputs are locked, or don't register. Since I played the game with a KB+M (because that's how you play shooter games you ingrates) my Sprint Dashes would sometimes register twice when I only pressed it twice, or I could get stuck in a crouch position after Evading for some reason. So that was mildly irritating.

The art for the game is...well, we all know the writer of the game is a pervert. There's no dancing around that. 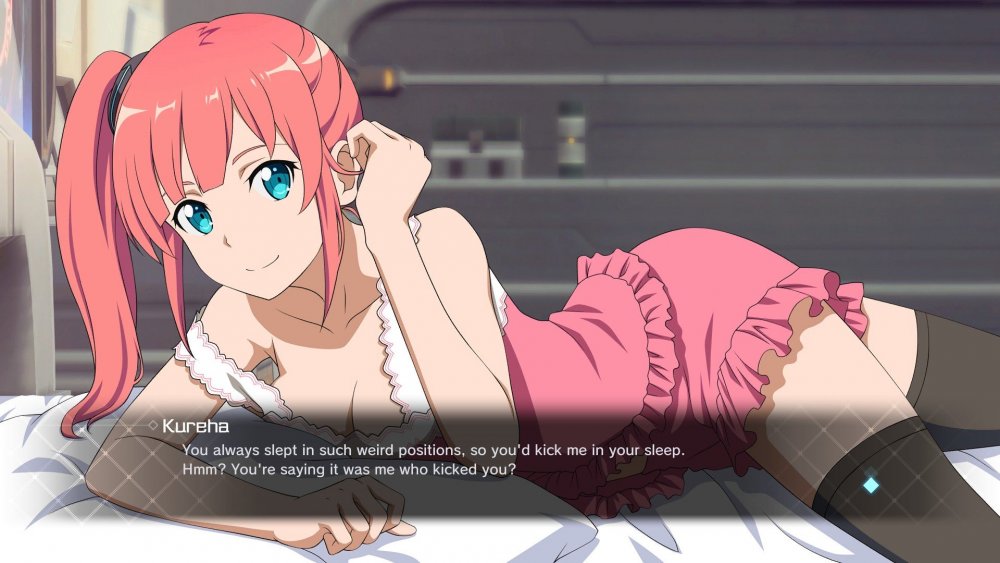 And yes, you can romance all the characters in the game. And you kind of have to in order to keep the game moving along.

So nothing really special here. It works sometimes when it feels like it. Other times it's a nearly flawless experience. 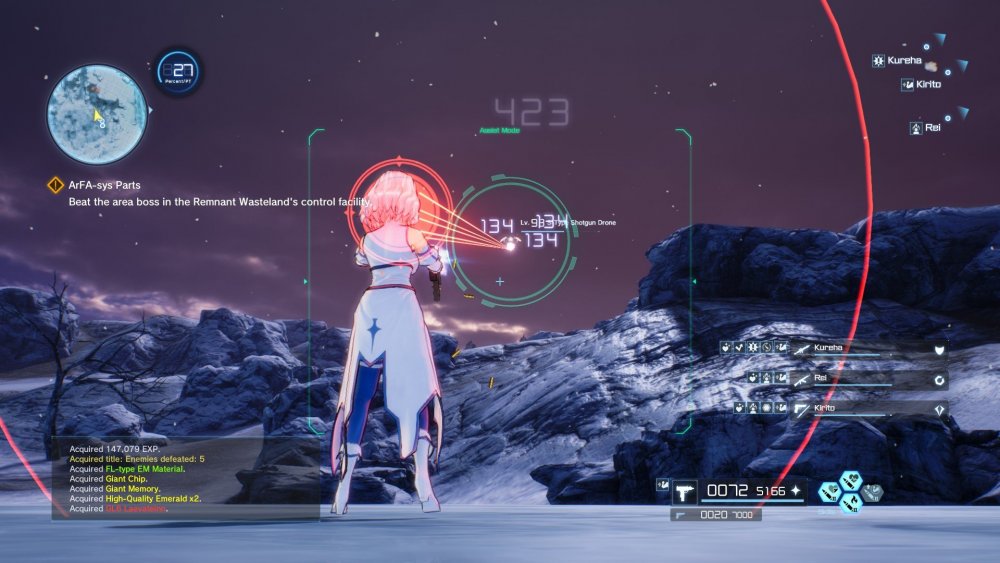 So like I said before, this game has lots of redeeming features when it comes to the replayability of the game. Especially when trying different builds, or different characters, or different weapons. There are near limitless combinations available at your disposal and they are all at your finger tips. However, the only downside to the replayability I will say is that NG+ is actually harder in terms of coping with the mechanics than it is on NG. Which is why I highly recommend against NG+. Instead, just make a new character and build them up again with a particular build you have in mind. It will save you a lot of headache that way.

But yeah, in terms of Replayability, there is A LOT to have.

Now, it's time for the final wrap-up. In this section, I'll detail if this game is truly one for you, and if you should decide to play it or not.

Would I recommend this game?:

This is kind of a tough one to decide. If you are one of those people who prefers story in their game, I would say give this one a hard pass. And probably the whole SAO franchise in general a pass. If you don't care for a bad story but want a good game, then yes, I definitely would say get this game. HOWEVER, I would highly advise against getting this game on a sale for -50% on Steam, for a comfortable $20 instead of the full asking price of $40. This game is not even worth $20 in some regards but that's a whole other can of worms that I won't open. 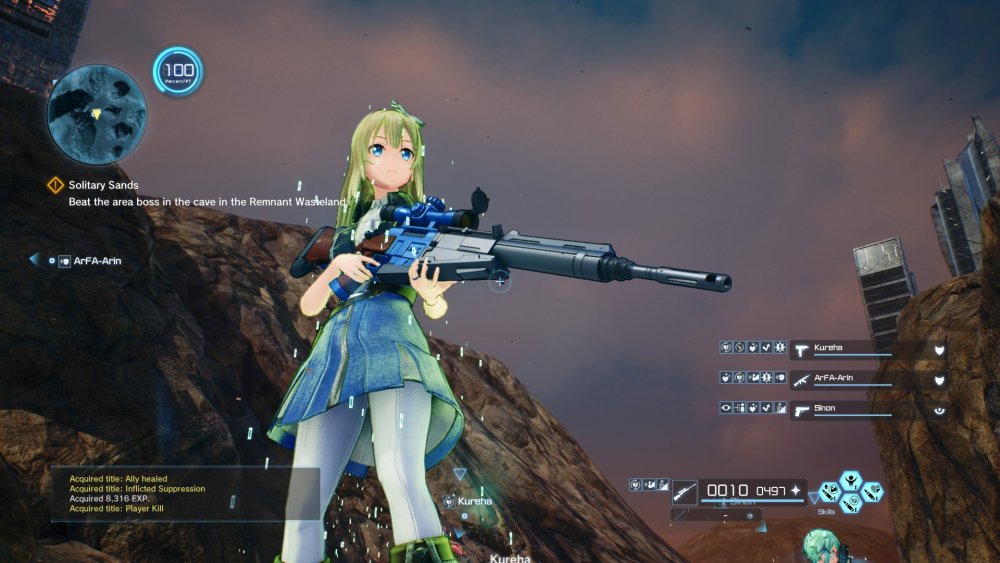