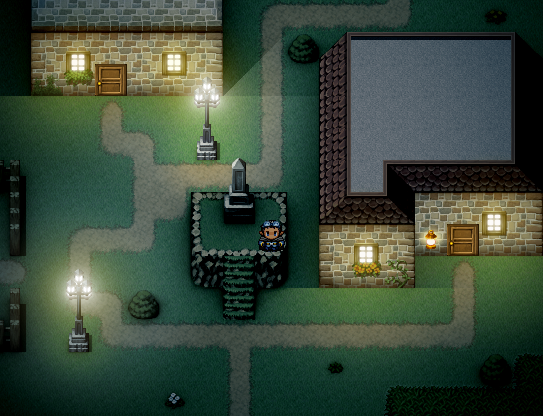 This is my first ever blog entry, so hey guys... if there's anyone who would read this that is.

Well, I better introduce myself by first saying that I have a strong interest in 3D animation as that's where I want to be in the future and so for anyone interested, here's some of that stuff - http://www.youtube.com/user/Flyingfoxenator

Anyway, back to rpg... I just recently got VX Ace and joined this community so on my profile I'm classed as a newbie, yay haha.

...buuut I have had experience with the previous versions as well and I must say that Ace is such a huge and awesome improvement, thankyou so much Enterbrain

So of course I've been playing round with all their new features (yea I know, it's like a year old now, but new to me anyway). Everything about this program is just mouth wateringly good :'D

Then after coming on here, I've just been looking up all your guys awesome scripts. Still haven't quite played round with those yet (also please don't mix me up with a scripter... sure I understand it, but I can't write any myself... yet). One of them was Khas Awesome Light Effects script (http://www.rpgmakervxace.net/topic/1003-khas-awesome-light-effects/?hl=khas)

Now for some reason I looked at it and thought meh, then carried on. Later on, I saw some images on deviant art on lights and saw things I hadn't even seen or thought of before that would now change the way I use RPG Maker. I had always avoided night scenes, probably because I couldn't get the lighting to look as good as it did during day. but after seeing these images, I figured I would first draw out the scene in RPG Maker, then printscreen and edit in photoshop to transform it into night. So that's exactly what I did for my first test below. I then created a tile set out of that. Which technically is just that image spread across the space of a tile set.

and during the process of this, I looked back at Khas Lights, and just realized how awesome they really are... so yea, I can understand why awesome has to be in his title lol.

Just the way the shadows move is incredible, thanks Khas!

So just thought I'd post the demo. Enjoy guys, I really hope you give this a go as you probably won't regret it haha - http://www.mediafire.com/download/30sjy2uuph2tbu5/Project_Day-Night_Demo.exe

If there are any major glitches or anything in the game (as this is my first post of uploading a game etc.) please do tell

...especially because those doors are quite messy, event wise.

Also, I know this probably isn't the place for requests, but if anyone actually does have any requests, please give me yell as I might just be able to help. I can do everything in this program but scripting and composing music/sound effects.

All the script credit goes to Khas. Also all his lights in that folder and used in the demo are his. - http://arcthunder.site40.net

Everything else was created by me. You can do whatever you want with this (not sure what you would do with this, but hey) ...just credit me if you can be bothered, I would appreciate it, thanks.