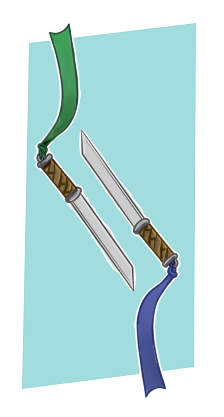 Swords recieved from her twin brother before his death.

He originally bought them with his saved up allowance (and some extra help from her parents) to give one to his sister and one for himself.

The siblings were raised with combat training from their father using wooden swords and on their 16th birthday, he decided to gift each of them matching short swords.

After his death however, Alex took both swords and learnt to dual wield them. The green ribbon is Alex's and the blue ribbon is her brothers.

There are no comments to display.