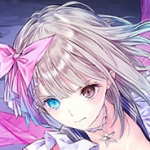 By Radiant Arin, January 18, 2017 in Theory and Development