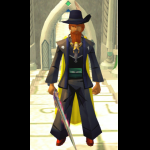 By ShawnHartwell, August 26 in Theory and Development