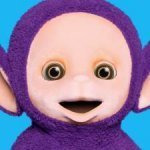 By Tyseus, November 21 in Editor Support and Discussion