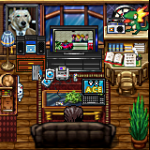 ace Well-Done Seasons in an RPG